My latest wee vid, done whilst trying out new editing software, as a learning exercise … and a long, slow fukken annoying process it was

I did the music on an old steam-driven prog … vox added on the laptop … rather lo-fi, but that’s the way I like it

After lotsa mistakes and hassles, I give up … this’ll have to do

The words are from poem that I wrote, performed over a bit of music that I also wrote, and played, … they just fitted perfectly together somehow

When I was in my 20’s, I read a rather popular book at the time, called “Bomb Culture, by Jeff Nutall … dealing with the impact of being the first generation raised living in the shadow of nuclear war, and how that affected our attitudes and caused the emergence of the Beat Generation and subsequently, the Freak Generation … the term “hippy” being an Americanism, or media term, which we sorely resented at the time

I painted this wee image back then, and it has hung in our living-room for decades.

We’re re-decorating … so, it’s changing venue … and I scanned it whilst it’s in storage

I’d forgotten about these illustrations, done for a wee story I wrote 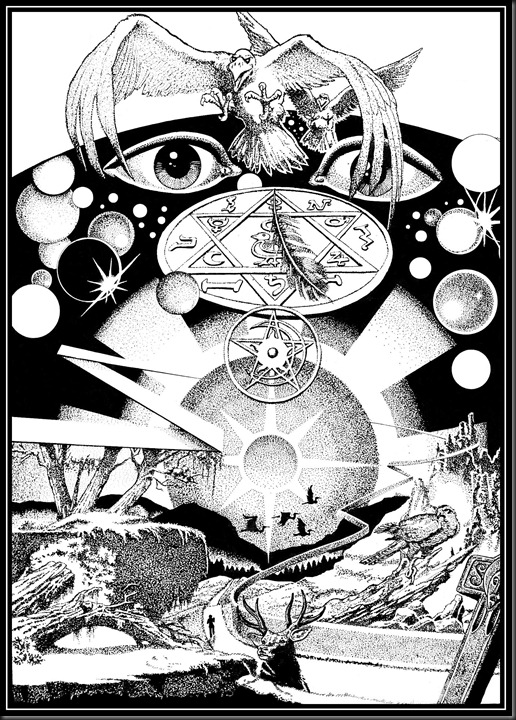 The first drawing is a view of the Land Of The Celts, where Musky The Wuskie was born

The second is an illustration of The Grand Wazoo, indulging in the ceremonial act of, Sky Ski-ing , and was done to accompany a story I wrote about a wee character called Musky The Wusky – who is trying to save his village from the influence of the marauding Pictish hordes.

The long road you see in the 2nd drawing, runs through a 23-mile long canyon, which was eventually flooded, and is now known as Loch Ness

And, here is Musky, leaving home to set off to find his fortune and save the tribes colour fields, where all the world’s colours and hues are grown & harvested.

DEDICATED TO KENNY AND TRISHA … THEY KNOW WHY

Many years ago, some 10-15 … I’m not at all sure … my son Kahl wrote and produced a lovely wee bit of squelchy synth dance … I then added piano and guitar noises and now, many years on, I’ve added some spoken word and some collage images to create this wee vid 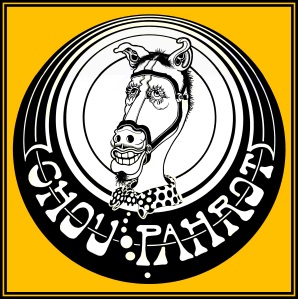 As I related in an earlier post,…  https://stuwho.wordpress.com/2012/02/16/chou-pahrot/ … the mighty Chou Pahrot were a weird 70’s Glasgow phenomenon that only the truly stoned & deranged could and would appreciate

A cacophony of deranged syncopation and discordant mayhem which would take you to the point of teeth-gritting surrender, and would then suddenly drop off a cliff of feedback and bass to emerge as a beautiful violin melody of exquisite toe-tapping sensibility … and all done with a huge tongue wedged in a Clydesdale horse’s cheek

Here is a hissy, old recording of that experience that is worth the effort … if you dare

Not for the faint-hearted

Chou Pahrot – Live at the STUC Birthday Party, in 197?ish

In the mid 70’s, I played acoustic guitar (badly) and sang (enthusiastically) in a wee four-piece combo called Flat Out, alongside Eddy Cavin, Alan MacMaster, and Keith Shirlaw; and the occasional addition of Jim(my) Jazz (Alexander)

We had a good laugh doing sorta folk/blues/rock, with just a wee touch of The Bonzos too, and even released an EP – FLAT UOT – An Accident Looking For Somewhere To Happen.

Keith did the cover artwork, and although I can’t seem to locate the original B&W cover, I did find this version that Keith and one of my kids coloured in – the cover was intended for that very purpose, at my suggestion, as was the deliberate typo.

I was doing posters for the band and organising gigs too, and produced a poster for a night down at Cumbernauld Theatre, still called The Cottage at this point, and decided on a whim to call the event “An Evening Without Bing Crosby”.  I’d completed the pen and ink drawing that was the poster, given the artwork to someone to print them off, and received the finished posters, which were then distributed around Cumbernauld.

A copy of the poster was sitting on my drawing-board when a mate arrived, looked at it, and giggled furiously: “Wow, that was fast” he exclaimed.

”Being that topical, that quick”

Turned out that the famous crooner and child-beater, Bing Crosby, had died that very day, just as the posters were being put up in shop windows and bus-shelters

In a simpler, less shock-weary time this was considered to be in rather bad taste

I was so chuffed, and well-pleasedwith the synchronicity … and began a long tradition of introducing a wee shock element into the band posters I produced from there onwards

Shortly afterwards I produced a poster for the band using the  monkey graphic featured below, with the very fine slogan

FLAT OUT
BETTER BAD THAN BORED 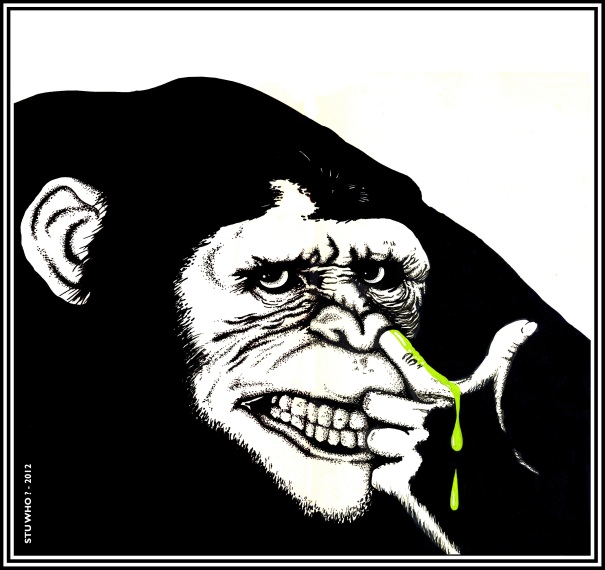 Brian Miller was a friend,  artist, writer, designer and director who lived and worked in the town of Cumbernauld for nearly 50 years.

Sadly he passed away last August, but in his honour the Cumbernauld Theatre presented an evening of his work on January 28 2012.

This is a wee film tribute, beautifull put together by his son, Kevin

Brian Miller, was an artist, writer, lover of culture and enthusiast of life

Brian was Cumbernauld’s town artist for most of its early years, and his impact on the town’s civic art, and its colourful uniqueness, was dramatic and powerful.

His contributions to the culture and arts in Cumbernauld was similarly dramatic (pun intended), as he was one of the small band of enthusiastic fanatics who established The Cottage, now Cumbernauld Theatre, as a venue for drama, music, comedy, and a wealth of community productions.

No matter what your interest, Brian would be there to lend advice, lend a hand, or even just offer transport or a sympathetic ear – his enthusiasm and support for every single facet of the arts knew no bounds.

Brian also established himself as an unofficial writer-in-residence for Cumbernauld itself, and his productions, musicals, and plays became the launching pad for the artistic aspirations of a wide-range of local wannabes, over the years …. And that included me

Brian had supported my work as an artist at The Muirfield Project, and gave us valuable assistance in establishing a screen-printing department there … assistance, without which, we’d have struggled to survive

He also, surprisingly, offered me a leading role in a play he’d written … all the more surprising as I had no acting experience, and was a mohawk-sporting nutter who fronted a very anarchistic, local band, not exactly renowned for our gentility or love of the establishment

It was a helluva chance for Brian to take, and one that turned out to be my first step on the ladder of performance arts, and the start of a brand new career.

Brian kick-started the aspirations of lots of Cumbernauld’s arts and drama community, and was a genuinely, lovely man and a true gentleman in every respect

On Saturday night, the original Cottage Theatre, and then Studio Theatre of Cumbernauld Theatre, has now been dedicated and renamed The Brian Miller Studio Theatre in Brian’s honour

And that is just as it should be

I wrote and performed a tribute for Brian, earlier in the week, at the  Cottage … and this wee poem was part of it.
.

In every village, every job was valued for it’s worth
And people took their occupation’s name as being their own
So, Bakers, Smiths and Cooks soon became a family name
Whilst the Cobblers thought they’d leave that trend alone

But the man who ground the flour and wheat, in windmills, or by rivers
He’d take the coarsest grain the farmer grew
And turn it into something more refined, and by his efforts
Would produce the finest flour-power too

Brian was a Miller, of people and ideas
An auld hippy of that fine, old school persuasion
With a love of words and images, toy robots, and dramatics
Be they Western, Eastern, African, or Asian

It was the source of all that passion
Which he shared with oh so many
In the years he sweetly tended Cumbernauld
Like a gardener, with love and care, and total dedication
Gamely answering that question
”What’s It Called?”

Brian helped define this town, by word and deed, and vision
His enthusiasm shaped a generation
Of artists, playwrights, actors and wee chancers, just like me
His encouragement and help was inspiration

In a world portrayed as selfish, Brian was a giver
Who unselfishly encouraged all he met
I thank him for the arse-kicks that he aimed in my direction
It got me moving, and I’m eternally in his debt

Brian was a Miller, of people and ideas
His legacy in, what some still call, The Cottage
Will shine on in our memory, for many years to come
Like a spotlight of a hundred thousand wattage!!

(Piss-off … let me see you find a better rhyme for Cottage!!)

Brian gave us laughter, in a world of short supply
He gave us colour in a world of black and white
In this town of dark grey concrete, he brightened up our landscape
Illuminated by that Miller Light.

STU WHO?
Create a free website or blog at WordPress.com.